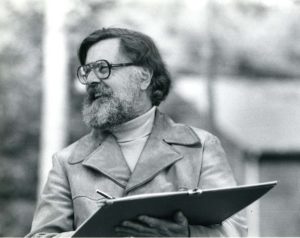 Artist Richard Welling, through his detailed ink drawings, chronicled the cityscape of Hartford and other cities.

Welling graduated from Hall High School in West Hartford. He briefly attended the Yale School of Fine Art, but left to enlist in the Army in November of 1944. After his discharge in 1946, he entered Parsons School of Design in New York City. He graduated in 1949.

Upon returning to Hartford, Welling worked in advertising at the Charles Brunelle Company. In 1957, he went into business for himself as a commercial artist designing brochures and promotional materials. His clients included Connecticut General Insurance, Aetna, and United Aircraft Company.

New construction often meant the demolition of existing buildings. Welling would draw the old buildings to create a record of what had come before. He also often sketched the demolition process.

Many businesses commissioned him to sketch their buildings. His drawings hung in boardrooms and offices all over Hartford.

Welling undertook a long-term project to document the construction of the twin towers of the World Trade Center. He received permission to go on-site and wearing his hardhat, he made many drawings of the massive project. He went to New York monthly and located three spots he could return to for continuity.

After September 11th, Welling donated 14 of the drawings to the New York Historical Society. They were on display at a special ceremony and exhibit on the first anniversary of the tragedy.

Hartford Courant. “He Was Drawn to Cities: Hartford Artist with an Eye for Details Dies at 83.” November 12, 2009