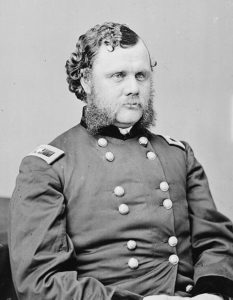 Born in New York, Robert Ogden Tyler moved to Hartford when he was seven years old. As a teenager, the state of Connecticut appointed him to the United States Military Academy at West Point. He graduated in 1853.

Assigned to the 3d Artillery, Tyler was engaged in the hostilities of the Spokane expedition of 1858. In April 1861, he was at the bombardment of Fort Sumter, which is recognized as the battle that started the American Civil War.

While serving as the Division Commander of the 22d Corps, Tyler and his men were publicly recognized by General Meade for driving back an attack on Ewell’s Corps during the Battle of Spotsylvania Court House. Tyler’s military career was cut short at the Battle of Cold Harbor when he suffered a severe foot wound that impacted him for the rest of his life.

After the war, Tyler was promoted to the rank of Brevet Major-General. While he continued to serve with the Army until his death, his wartime injuries eventually led to his demise. Tyler died in Boston just weeks shy of his 43rd birthday.