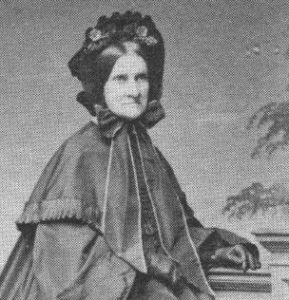 Sophia Fowler was born deaf at a time when there were no schools for the deaf in America and only three in the world.

In 1817, her father learned that Thomas Hopkins Gallaudet was working toward the establishment of a school for the deaf and mute. Hopeful that his daughter could attend, he took Sophia to meet Gallaudet.

When the school opened, Sophia was accepted as the fifteenth student. She studied at the school for three years. Then in 1821, Gallaudet proposed marriage. Concerned that her schooling would end, it was not until he assured that her education would continue that she agreed to marry him.

Gallaudet and Sophia were married 30 years and had eight children. In 1857, their son, Edward Miner Gallaudet, became principal of the first school for the deaf and blind in Washington, D. C. He asked his mother to move with him. She became the founding matron of the school. Sophia lived out the rest of her life in Washington.