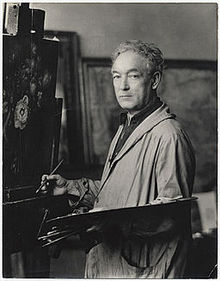 A Philadelphia native, William Glackens was a noted American artist.

After high school, Glackens worked as an artist-reporter for The Philadelphia Record and later the Philadelphia Press. He also took evening classes at the Pennsylvania Academy of the Fine Arts. There he met Robert Henri, a painter and charismatic figure in Philadelphia art circles.

In 1895, Glackens and Henri traveled to Europe. Glackens studied the Dutch masters in Holland. Then he rented a studio in Paris with Henri for a year. They returned to the U. S. in 1896.

Glackens worked as an artist for the New York World, New York Herald, and for various magazines. McClure’s Magazine sent him to Cuba to cover the Spanish-American War. In 1904, he was able to give up illustration and devote himself to painting.

While in New York, Glackens and Henri befriended other artists who were tired of the National Academy of Arts rejecting their work. The group, consisting of Glackens, Henri, Arthur B. Davies, Maurice Prendergast, Ernest Lawson, Everett Shinn, John French Sloan, and George Luks, became known as The Eight or the Ashcan Group. Much of their work rejected the formality and gentility of 19th-century art and looked to working class metropolitan life for material.

By 1910, Glackens had broken away from the Ashcan style and adopted Impressionism. He became known as the American Renoir. His paintings received gold medals at exhibitions at the Pennsylvania Academy of Fine Arts in 1933 and 1936.