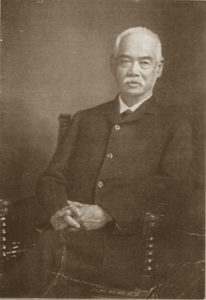 Born in southern China, Yung Wing attended missionary schools starting at age seven. At 13, he entered Morrison School led by Connecticut minister S. R. Brown. When Brown left China in 1847, he brought Yung with him and enrolled him at Monson Academy. Yung completed his studies at Yale in 1854, the first Chinese student to graduate from an American university.

In 1855, Yung returned to China. With the signing of the Burlingame Treaty (1868), which reestablished friendly relations between the U. S. and China, Yung wrote a plan for Chinese students to be educated in the U.S. The idea was 30 students would be sent every year for a four-year period. Each student would study for fifteen years and then return to China.

Yung was appointed Deputy Commissioner of the Chinese Educational Commission. In 1872, the first group of Chinese students arrived in the U. S. Nine years later, in 1881, the Chinese government ended the program and recalled its students. While the program closed sooner than anticipated, it is credited with providing China with leaders in the fields of engineering, diplomacy, sciences, and academia.

Yung, who married Mary Kellogg in 1875, continued to work to improve relations between China and the U.S. for the remainder of his life.