Most angels found in American cemeteries are rooted in Christian lore. Although there are references to angels in the Bible, there are no physical descriptions included in the text. Earliest depictions on sarcophagi portray angels as young men.

Some of the stories shared on the on the tour include:

The first representation of an angel with wings is in a 5th-century mosaic in a church in Rome. The way we perceive angels today was developed in the Middle Ages and refined during the Renaissance. Religious art in the Renaissance introduced halos, white garments, horns, harps, and wings – to differentiate angels from humans. 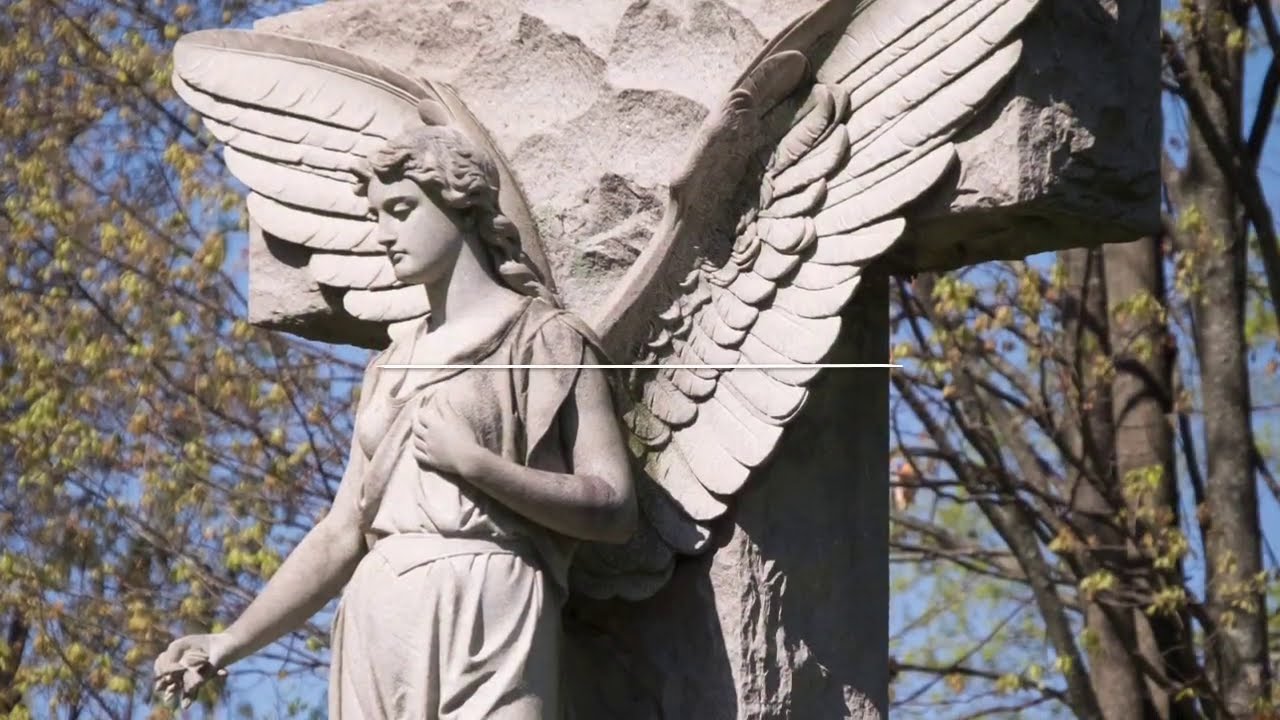 The Angel of Resurrection by Randolph Rogers graces the top of the Colt Monument. The figure, likely the angel Gabriel, is depicted with a horn. Aside from the generic, Gabriel is the angel most often found in cemeteries. It was Gabriel whom God sent to announce the birth of Jesus. He also signals the departure of a soul from the earth and its arrival in heaven.

In 1870, the Hartford Courant described the bronze figure atop the Clark Monument as “the Angel of Life.” Designed by Truman Howe Bartlett, the figure symbolizes “the Divine influence ministering to the needs of mankind.” The left hand is extended to give assistance and the right arm points upward to the source of this assistance. The hair, made in the form of a flame, is emblematic of purity.

An angel graces the Howard Pyramid, ready to escort the deceased through heaven’s door. The large pyramid exemplifies the Victorian taste for Egyptian ornamentation. Fashionable throughout the 19th century and into the 1920s, the style incorporated motifs of ancient Egypt. The pagan origins of the pyramid aroused concern about its use in cemeteries however. To appease the religious community, many designers of Egyptian Revival tombs added Christian symbols, most often angels.

Attributed to Smith Granite Company, circa 1889-97

The Smith Monument is similar to The Angel of Peace in River Bend Cemetery in Westerly, Rhode Island. According to their research, the model for the statue was owned by Smith Granite Company and was first produced in 1889 for the Pomeroy Monument in Utica, New York. The angel, with outstretched wings, holds laurel leaves. Laurel is associated with eternity and immortality as its leaves do not wilt or fade. Laurel is also linked to victory since in ancient contests the winner was crowned with a laurel wreath, which was supposed to bestow immortality.

It is possible the statue atop the Heublein Monument is Gabriel without his horn, the classic symbol denoting the angel. A New York Times article from 1896 describes a statue of Gabriel designed by Carl Conrads for a Troy, New York monument. The sketch accompanying the article is very similar to the Heublein statue, also by Conrads.

Check out our latest video about Cedar Hill’s Angels Among Us.