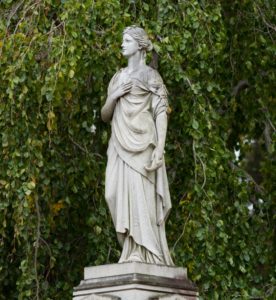 The Boardman Monument, made of Westerly granite, is the work of New England Granite Works. Described in the company’s accounts as a new model of the Statue of Hope, the monument features a female figure holding an anchor, an ancient symbol of hope.

Praise for the Monument

On February 9, 1878 the Hartford Courant remarked the Boardman Monument was one of the best works of Carl Conrads, New England Granite Works’ house sculptor. They noted the statue is “not only graceful in outline but is wonderfully expressive, the drapery managed with rare skill and the attitude marked by dignity and repose, the whole study evincing much care and thought.”

One of the seven virtues, Hope is one of the most common human forms found in cemeteries. The Boardman Monument is one of several Statues of Hope at Cedar Hill.

To learn about the popular monuments of Faith, Hope & Memory, check out our video here.