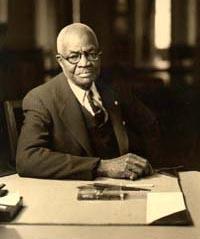 Charles Custis was born to slave parents in Virginia. As a teen he moved to New York. He was a member of a strolling quartet of singers before joining the “Famous Tennesseans.” Singing bass, he traveled throughout New England, New York, and Canada with the group.

Custis came to Hartford in 1882. He worked at a feed store and as a houseman before accepting a position at Aetna as a night elevator operator. He moved onto day elevator operator then janitor.

As janitor, part of his responsibilities included taking care of President Morgan G. Bulkeley’s office. Bulkeley was impressed by Custis’ cheerful, courteous manner and appointed him receptionist for the executive offices.

Upon Bulkeley’s death in 1922, Custis assumed the same duties for the new president, Morgan B. Brainard. Custis remained in this position until his death in 1950 at the age of 90.

Custis never knew his actual birth date, so he chose February 12, Abraham Lincoln’s birthday, to mark his own.