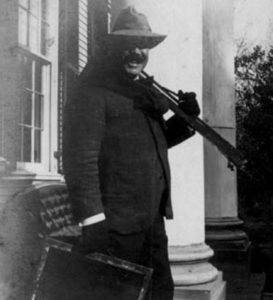 Allen Butler Talcott was born in Hartford to a prominent New England family. He displayed an interest in art while in grade school. He created sketches of his teachers and classmates in the margins of his schoolbooks.

Talcott graduated from Trinity College in 1890. He began his formal art education at the Hartford Art Society with William Tryon. He moved to Manhattan and studied at the Art Students League of New York. He then went to Paris for three years to study at the Academie Julian. He received his first artistic recognition when his paintings were exhibited at the 1893 and 1894 Paris Salons.

Talcott returned to Hartford and set up a studio which he maintained for a few years. He then moved to New York to join a cooperative studio complex established by Henry Ward Ranger. Ranger later founded the Old Lyme Art Colony in Connecticut in 1899. Talcott joined in 1901.

When Talcott arrived in Old Lyme, he stayed at Florence Griswold’s boarding house. In 1903, he purchased an estate in town. He spent summers in Old Lyme and worked during winters at his studio in New York City.

Talcott found his calling painting landscapes inspired by the local marshes, meadows, and forests. He was best known for his artistic portrayal of trees. Fellow artist Charles Vezin noted that “His fellows conceded that no one was his peer in the knowledge of trees and how to paint them.”