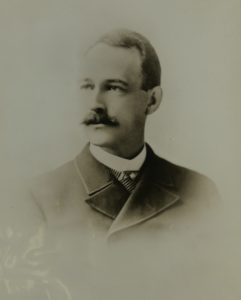 Although struggling, Weed Sewing Machine was well equipped and employed skilled mechanics. This attracted Pope Manufacturing Company, which was established in Boston in 1876. With Day’s urging, Weed began the manufacture of Pope bicycles in 1878.

With the rapid growth of the bicycle industry, Day was quickly promoted. When Pope Manufacturing became the sole owner of Weed in 1890, Day remained in charge of the manufacturing department as Vice-President and General Manager.

Day became interested in the automobile and made trips to Europe to study French vehicles propelled by electricity. He became convinced the electric automobile would emerge as the leading vehicle and devoted time to its development.

In 1897, Pope Manufacturing began production of its first electric automobile. When the battery-powered Columbia Motor Carriage was unveiled, it was the first demonstration of a mass-produced electric car in America.

Under Day’s management, the motor carriage department was enlarged and united the Pope Manufacturing’s motor plant with the New Haven Carriage Company and the Electric Storage Battery Company of Philadelphia to create the Columbia and Electric Vehicle Company of which he was President and General Manager.

The company’s production of 2,092 cars, some gas-powered, in 1899 accounted for nearly half the automobiles made in the United States.

In 1900, Day left Pope Manufacturing to become President of the Electric Vehicle Company. He resigned three years later and organized the Association of Licensed Automobile Manufacturers. He was its general manager until he retired in 1906.