Civil War Service
Back to all Notable Residents 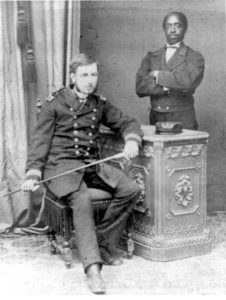 Henry Green was born in Virginia in the early 1830s. Having spent his life as a slave, he was either freed or escaped in the early 1860s after the commencement of the American Civil War.

Green made his way to Washington, D.C. where he met U.S. Secretary of the Navy Gideon Welles. Welles offered him a job as a servant for his family. During the war, Green went into battle as body servant to Welles’ teenage son, Thomas. After the war, he attended Thomas during Admiral Farragut’s ceremonial visits to European seaports.

When Welles left office in 1869, Green continued his employment with the family in Connecticut. He served as head servant and family coachman. After Welles’ death in 1878, Green again served as now Colonel Thomas Welles’ body servant.

Green worked for the family until his death. In his will, Green requested to be buried next to Thomas in the Welles lot. His grave is marked by a footstone inscribed Henry. In 2010, family members had Green’s name inscribed on the front of the family’s memorial obelisk.


Boyd, Jean Mitchell. He Was There. Accessed at http://wesclark.com/jw/welles.html