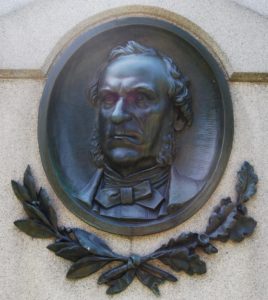 James Laurie was born near Edinburgh, Scotland. In the 1820s until 1832, he apprenticed in an office that made mathematical and engineering instruments.

In 1832, Laurie moved to Boston and worked as an associate engineer on the construction of the Norwich and Worcester Railroad. In 1835, he became chief engineer.

Two years later, in 1837, he was involved in the construction of the Taft Tunnel at Lisbon, Connecticut. One of the first tunnels built in the United States, the Taft Tunnel was carved through hard rock and is approximately 300 feet long. It is still in railroad use in its original form.

Between 1861 and 1866, Laurie was chief engineer of the Hartford and New Haven Railroad.

He oversaw the design and construction of the Warehouse Point railroad bridge (1866), one of the first iron bridges in the country. The bridge, which remained in use until the early 20th century, was a notable example of riveted bridge work with a span of more than 177 feet.

Laurie was an early attendee of the Boston Society of Civil Engineers. He served as president for two years and was the first to present a paper to the Society.

In November 1852, he was one of 12 engineers who met and formed the first national society of engineers in the U. S., the American Society of Civil Engineers and Architects. He served as its first president and presented the group’s first paper which advocated for an elevated railroad in New York City.

In 1912, the Society established the James Laurie Prize, which is awarded annually to a member who has made a definite contribution to the advancement of transportation engineering.