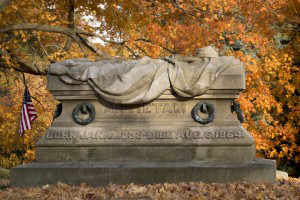 The Stedman Memorial is an elaborately carved sarcophagus of military design by John M. Moffit. An English-born sculptor, Moffit is best known in Connecticut for the Soldiers’ and Sailors’ Monument in East Rock, New Haven.

Erected to honor General Griffin Stedman (1838-1864), the memorial features a flag, hat, belt and sword draped across the bier. The names of the Civil War battles in which Stedman fought are carved into the folds of the flag and on the sides of the monument. On the base appears the inscription: “Brave, just, generous and pure, without fear and without reproach.”

Stedman died in 1864 from wounds suffered at the Battle of Petersburg. He was originally laid to rest in New London. In 1875 his remains were removed and he was interred in the family lot at Cedar Hill. To learn more about Griffin Stedman visit his notables’ page here.