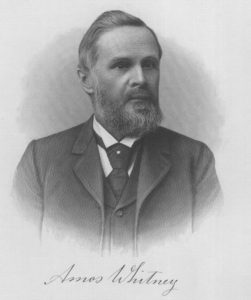 Amos Whitney was born in Biddeford, Maine. At age 13, he was apprenticed to the Essex Machine Company of Lawrence, Massachusetts. After a year as a journeyman, he came to Hartford and found work at Colt Manufacturing Company. It was at Colt that Whitney met Francis Pratt.

In 1860, the duo began manufacturing machinery resulting in the founding of Pratt & Whitney. The company was formally incorporated in 1869. They manufactured guns and gun making machinery, as well as tools to make sewing machines, putting into practice the concept of interchangeable parts.

Whitney served as superintendent, and later vice president, of the company. In 1898, with the retirement of Pratt, Whitney became president. He retired in 1901 when the company was acquired by Niles-Bement-Pond Company.

Whitney was known for establishing policies leading to successful training of apprentices.