Athletics, Business
Back to all Notable Residents 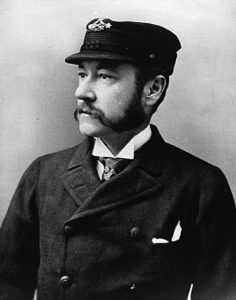 Caldwell Colt was the son of gun manufacturer Samuel and his wife Elizabeth Colt.

Educated at Yale’s scientific school, Colt designed his first firearm in 1879. He was made vice president of the Colt’s Patent Fire Arms Manufacturing Company in 1888 at the age of 29, but there is little information regarding his active participation in the business.

Colt was most interested in sailing, hunting and gambling. Since he received his inheritance at age 21, he was able to pursue his hobbies without financial concerns.

Colt’s interest in yachting began in 1868 at age 10 in Newport. He acquired his first yacht at 18 and eventually owned 5 yachts. In 1881, he purchased the Dauntless, a champion racer.

Colt averaged 10 months a year sailing. He toured Europe and the West Indies and regularly visited Florida where he was a member of the St. Augustine Yacht Club.

In 1887, Colt took part in a transatlantic race between the Dauntless and the Coronet. He crossed the Atlantic in 16 days, arriving 30 hours behind the Coronet.