Education, Ministry
Back to all Notable Residents 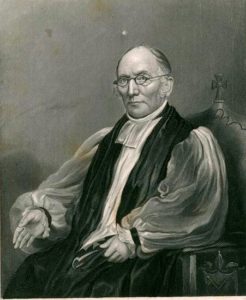 Thomas Church Brownell was born in Westport, Massachusetts. He graduated from Union College in Schenectady, New York in 1804.

In 1805, Union College appointed him tutor of Greek and Latin. The following year, he accepted a position as professor of logic and belles-lettres. After studying chemistry and kindred sciences, he taught chemistry at Union.

In 1813, Brownell was baptized and confirmed as an Episcopalian minister. Three years later, Bishop Hobart of New York ordained him a deacon. In 1819, the diocese of Connecticut chose Brownell to serve as the state’s 3rd Presiding Bishop.

After serving for nearly a decade, Brownell resigned the presidency in 1831. He focused his time on serving as Connecticut’s Bishop.

In 1852, the United States Episcopal Church appointed him its 7th Presiding Bishop. He held this position until his death in 1865. During his tenure, Episcopalian clergy and churches greatly increased.