Business, Writer
Back to all Notable Residents 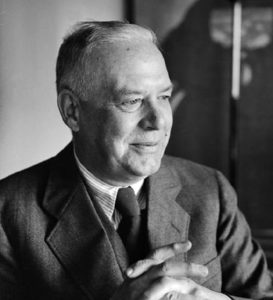 Wallace Stevens was born in Reading, Pennsylvania. In high school, he achieved high marks and was known as a skillful orator. He reported for the school newspaper. Upon graduation, he pursued his literary interests at Harvard.

Stevens devoted himself to the literary aspects of Harvard life. By his sophomore year he wrote regularly for the Harvard Advocate. By the end of his third year, he had received all of the school’s honors for writing. In 1899, he joined the editorial board of the Advocate’s rival publication, the Harvard Monthly. The following year he assumed the board’s presidency and became editor.

By that time, Stevens had published poems in both the Advocate and the Monthly. As editor he produced stories and literary sketches. Because there was a frequent shortage of content during his tenure as editor of the Harvard Monthly, he often published several of his own works in each issue. Unfortunately, due to a lack of family funds, he had to withdraw from Harvard in 1900 without graduating.

Stevens moved to New York and began reporting for the New York Evening Post. He found this work dull, but it enabled him to explore New York City. He thought about quitting to devote himself full time to literature. His father advised him that it would be more prudent to study law.

In 1901, Stevens enrolled at New York School of Law. He graduated two years later. He was admitted to the New York bar in 1904, and spent the next few years working at various law firms in the city.

In 1908 he accepted a position with the insurance firm American Bonding Company. Financially secure, he proposed marriage to Elsie Kachel, a young woman from Reading. His father opposed the match and Stevens never spoke to him again. The couple married in 1909.

Stevens didn’t write poetry for several years, but resumed in 1913. He was published in various periodicals. In 1916, he published his first play, Three Travelers Watch a Sunrise. That same year Stevens joined the home office of the Hartford Accident and Indemnity Company. He remained with the company for the rest of his life, becoming vice-president in 1934.

Stevens never learned to drive and would walk to work from his home on Westerly Terrace. He would compose poetry along the way, writing on slips of paper which his secretary would type up.

In 1923, Stevens published his first book of poems, Harmonium. The following year, his daughter Holly was born and parenthood kept him from writing as much as he would have liked. In 1933, he resumed writing steadily and published his second book in 1934 called Ideas of Order.

Though now considered one of the major American poets of the 20th century, Stevens did not receive widespread recognition until the publication of his Collected Poems, just a year before his death.

Stevens won several awards for his poetry, including a Robert Frost Medal in 1951 and a Pulitzer Prize for Poetry in 1955.

University of Illinois at Urbana-Champaign. Wallace Stevens: Biography and Recollections by Acquaintances. Accessed at http://www.english.illinois.edu/maps/poets/s_z/stevens/bio.htm